After what seems like forever, I finally finished the post that matches my Youtube Van Tour! If you haven’t seen it yet, you can go and check it out here -> Van Tour, or if you prefer reading instead of watching something, continue with this post. 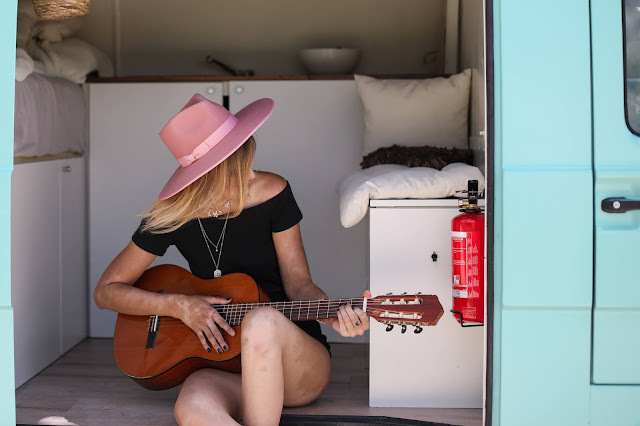 If you follow me on any social media channel, you probably know that I moved in my own little van around four months ago and joined van life. During lockdown and Covid-19, I converted a 39 years old VW LT31 ex-military van into a home with a little help from my dad.

A little backstory: I bought the van while I was still in Sri Lanka, my dad picked it up and it first went for a stop at the mechanics. The most urgent rust issues and a run over the engine and breaks were necessary, so this had to be done by a professional. When I got flown out to Switzerland from India, I ended up at my parents’ house and three months to somehow get over. The van was completely raw, he has been previously isolated so I won`t cover this topic as I personally have no idea what's under those walls. He still had some military parts in it and was his original, camouflage green color. 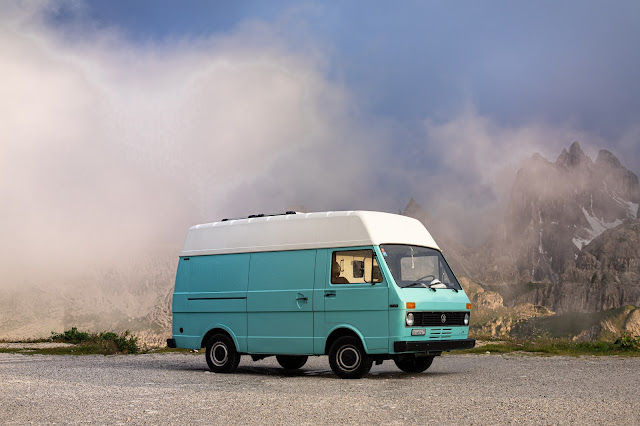 His name is Dior, and here is why:

When I was around 12-16, I had a horse named Dior. He was a gnarly little military horse, stubborn and not the prettiest, but loyal and one of the safest companions you could wish for. He served the swiss military for over 15 years and died at the age of 30. So when I got the van, he still had all the military documents inside and every km was documented. One of those stated that the van actually was stationed at the exact same base my old horse has served at, and when I checked the years, it was exactly the same period! Chances are that they may have even crossed paths at some point and I knew that there is only one name I can give him - Dior. He`s old, stubborn, slow but loyal, and never gives up. Just like the horse.

The first thing we did, was sanding the outside and removing the old, moldy rubber and replaced it with new silicone. We used a grey base before applying the color, and didn`t roll but spray painted him. Make sure you do it in a well-ventilated space and to tape very precisely. This took the longest, as you always have to wait in between layers and if you do it outside, find the perfect time so it doesn`t dry too fast or makes the color run. 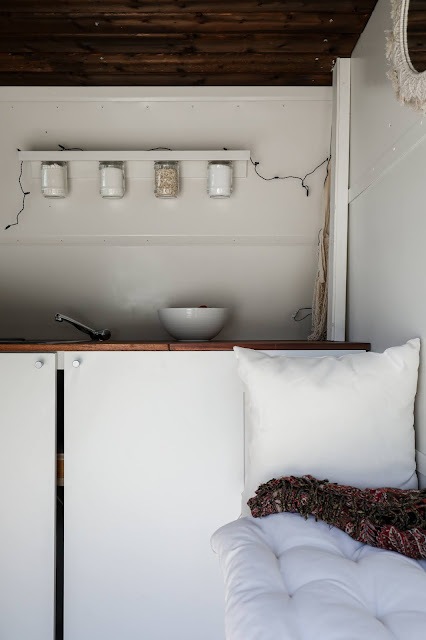 The next step was getting all the old interior out and sanding those walls before cleaning them and rolling on the color. It’s much easier to roll instead of spray the inside; I decided to go with the same cream white I used for the roof. If you got darker areas, like in my case the doors, you will need more layers and that takes a lot more time. 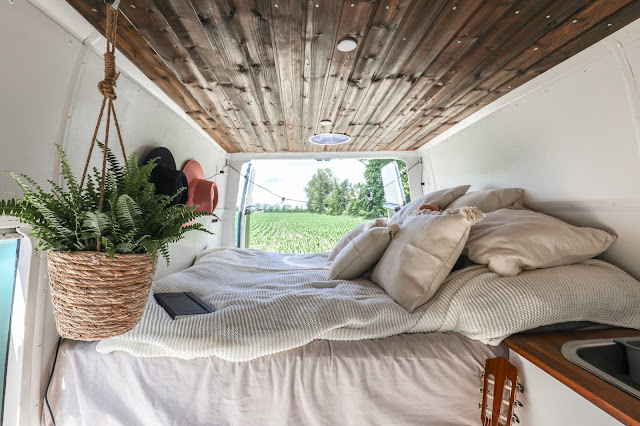 For the floor, I already had a very ugly construction floor in and we used it as a base to put the PVC on top. Mine is click, but I actually had ordered roll-out one that just never arrived due to COVID. I`m really happy with what I have in now: it's easy to clean, and sand is hard to see, so it appears a lot cleaner than it actually is. Great if you spend a lot of time at the beaches!

My middle wall was already in when I got it, but I decided to keep it as it separates my living space from the driver's cabin. It also keeps dirt from the open window entering the back, keeps the smell from both the engine and cooking in the back out while also isolates it all a lot better. I don`t miss it at all, and due to the high bed, I wouldn`t be able to look out through the back windows anyway. For now, I didn`t do the driver’s cabin as I didn`t have enough time, but it is definitely on the list for the future! With a car this old, you always have to look out for rust and as there is some visible around the ceiling, it is the first thing I have to go over. 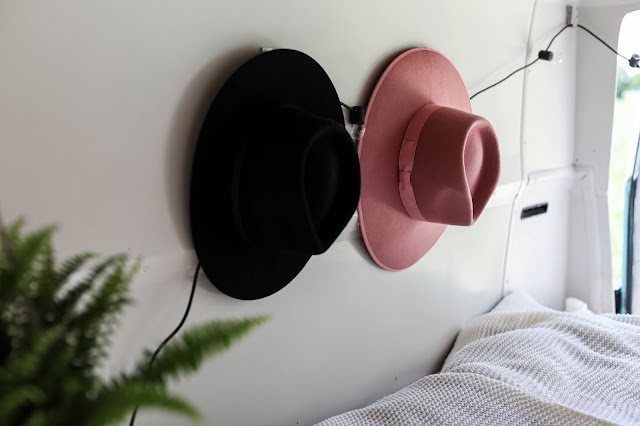 We put two Solar panels on the roof, they are glued on with Sikaflex and are 110W each. They run three LED lights, a fridge/cooler, two USB outlets, a water pump, and a normal power outlet. For me alone, this is more than enough and I currently have one lithium battery connected to it. My power system is not connected to the car battery, so I never have the issue to empty it, even though I actually have a really big starter battery due to it being military.

The ceiling is made out of wooden planks we aged; I have to go over it again as saltwater damaged it a bit, but the look is absolutely worth it. They are screwed to the roof, hiding the cables coming from the solar panels, and hold three LED spots. I got two rooftop windows that were already in, they were exposed so we fitted a thin metal layer around it to make it look better and cover the insulation. 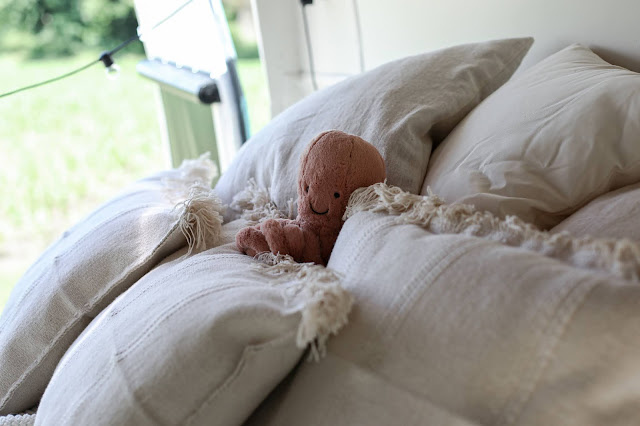 The furniture is all built from scratch: You can basically use any kind of wood for that and we closed the structure with foiled wooden doors that I sealed off on the edges. They have magnets built-in, so they won`t fly open when driving, but sadly they turned out to be too weak, so I need another solution for that. The side bench is actually where everything electric is stored in and the light switch is attached to it. Right next to it there is the cooler and storage space for food. Always use a grip mat as things will fly if you don`t. And trust me, soy sauce all over your van isn`t fun!

For water, I currently got 2x20l water tanks but will get another 2 to be able to be self-sufficient for longer when I have friends with me. The countertop is a simple wooden one that we cut to fit, the sink is IKEA and the hose is a single one, so no cold or warm water as it`s a lot easier to connect if you don`t have to cut one off. The greywater tube was cut to fit and goes into another 20l container, while a little water pump is in the freshwater tank and makes it possible for it all to work like it would in a normal house. 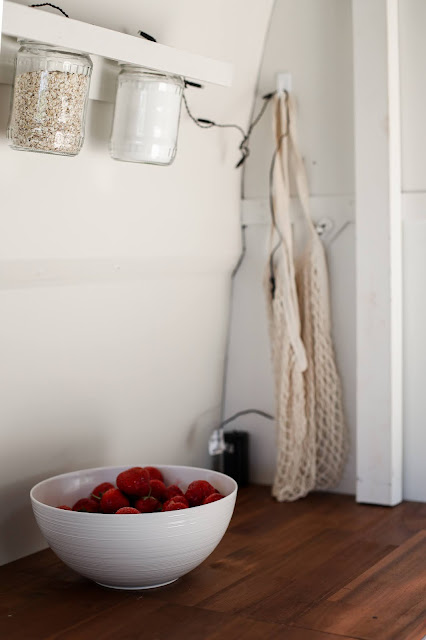 I decided to put a few main ingredients up the wall. For that, I just got a cheap plank, painted it white, put it up the wall and screwed the lid of four mason jars on it. It actually holds on really well, I didn`t have an incident yet and I drive over pretty crazy roads.

For the bed, I bought a second-hand mattress and cut it into the needed size, which is actually a lot easier than I thought. Mine is 24cm - I would always recommend getting a higher one just for comfort. Under it, there is more storage for cooking utensils and my wardrobe which is stored in boxes. On the back, there is a huge garage with space for tools, shoes, sports gear, extra water and dirty laundry. 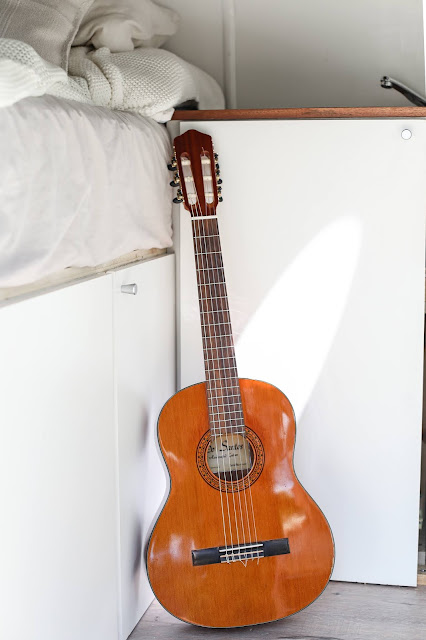 This was it, a little tour around my little home on wheels! If you got any questions about the van, feel free to ask away and I`m happy to help!