Festival Summer 2019: How to go green on a festival - OASG Edition

The second festival we take a closer look at regarding their sustainability is OpenAir St.Gallen. It is the only swiss festival in the 2019 Festival Summer series and I was really excited to see what they did this year as they promoted themselves "climate neutral". As it took place the weekend after Southside Festival, I had the direct comparsion and a good example set. Let`s see if the expectations were fullfilled! 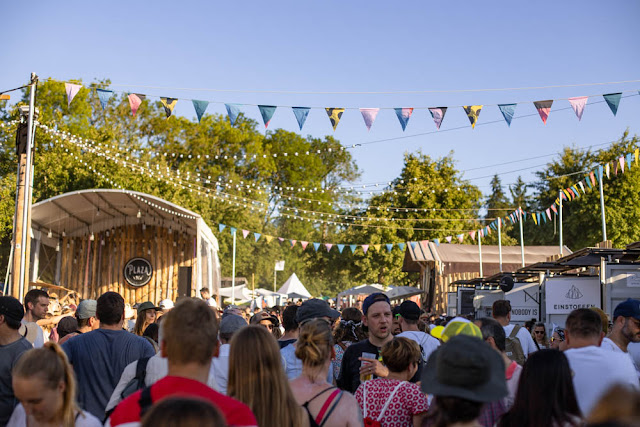 At OASG, the camping area isn`t seperated from the festival site itself and you can camp wherever you want! While this shortens ways, gives you more time chill with your friends and the possibilty to cook for yourself instead of buying everything onsite, it also brings its challenges trash wise. I actually witnessed the same progress as I did on all festivals this year, camps are left behind much cleaner than how they looked like ten years ago and people seem to act more enviromental friendly in case of cleaning after themselves. They charge you a tent deposit that you have to pay for every tent you take into the festival, if you take it with you when you leave you get your money back. If it is damaged, they have a big container at the exit where you can throw it away after you got your deposit, so it will be recycled correctly. This is a great idea and worked very well during the past years! I always really like that it is fairly easy to bring your own cuttlery, bottle or cup as you camp so close and don`t need to pass an extra security control. 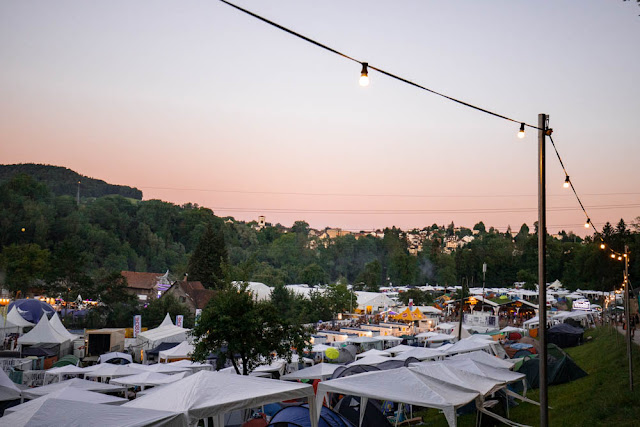 This was the biggest disappointement. I searched every stall, and there was a single one that offered something vegan, a vegan Focaccia at the Foccaceria!
I saw so many vegan restaurants, catering companys or restaurant promoting their presence on other swiss festivals that I really don`t get why there was not a single vegan only stall or at least some omni ones that offered a bit of a variety. There were more veggie options, but first of all they weren`t labelled obviously and you really had to search for them, probably 50 % of them were cheese dishes which is fine but just not what you except from a festival that advertises itself as sustainable and climate neutral. Swiss milk and a supermarket with quite a poor veggie/vegan diversity were main sponsor so maybe thats the reason, whatever it is, there is room for development. On a positive note, they claim that they only use meat from Switzerland and try to use bio/local produce to avoid long transportation and support the local farmers. 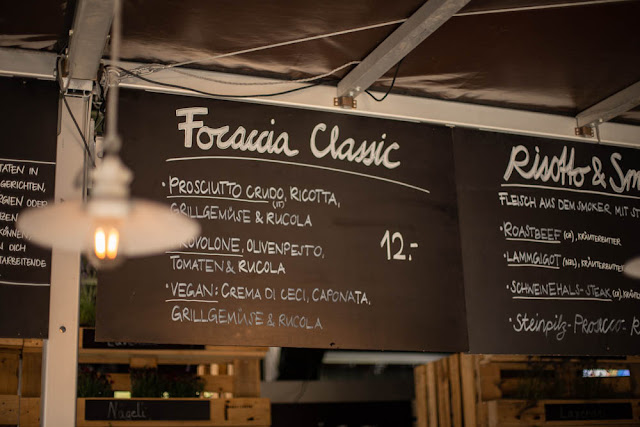 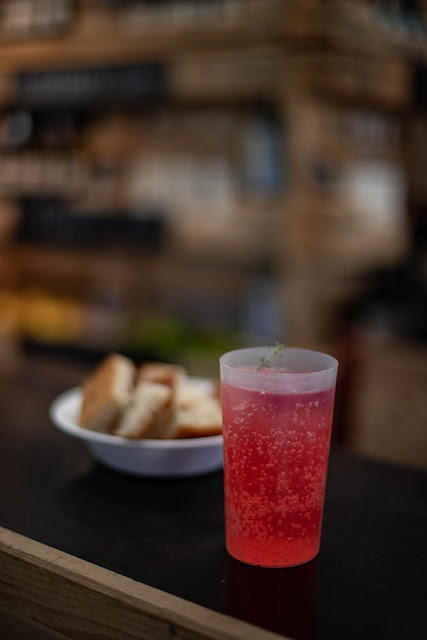 While at Southside the NGOs were placed right in front of the entrance so everybody had to pass by, at OASG they were hidden behind the tent stage at the very end of a row with food stalls. I doubt that many people noticed them or really learned something, if you look at the picture below , the last few tents you can see behind the stage are the non profit ones. If I remember correctly they were also mostly about sex ed, drug and alcohol abuse or one that belonged to the red cross, but nothing regarding refugees or climate change/waste reducing like you would expect. 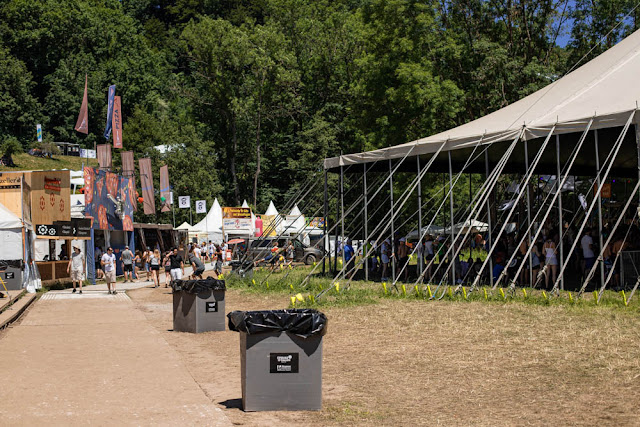 Waste reducing strategies on the site

Something that was really great was the fact that there were big trash cans everywhere, so you automatically threw your stuff in there no matter how wasted you were. There is also a deposit on absolutely everything, even on paper plates which is a bit annoying as they could easily have went to a recycling trash can but it definately motivates to bring your own. All the plastic cutlery was recycable and there is a deposit on cups, sadly in the Crew and VIP area they did not had this system and everything was single use plastic which is a bit disappointing. 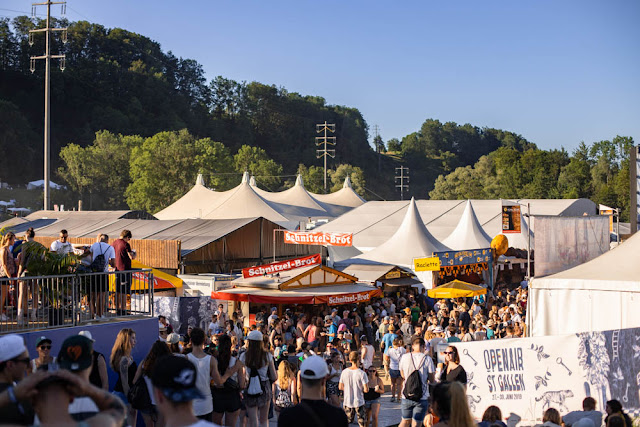 Effort for an enviromental festival

On saturday morning they held a panel called `festivals for future`where they discussed this topic with various guests like myclimate, Take a Stand or Climate Strike. Sadly I missed it, as I only arrived friday evening and didn`t see it before it was already over, but I personally feel like its a great direction to openly discuss these very important topics with festival visitors directly. They did pay myclimate to compensate the CO2 produce of the festival, so they are the first Climate neutral festival in Switzerland!
I also have to mention that there weren`t enough toilets so many people went into the woods and as the showers were so expensive ( 7.-CHF!) ,which is just too much, quite a few did bath in the nearby river with shampoo and shower gel which sadly is really harmful for the river itself. This Problem could have been solved quite easily by cheaper or free showers. 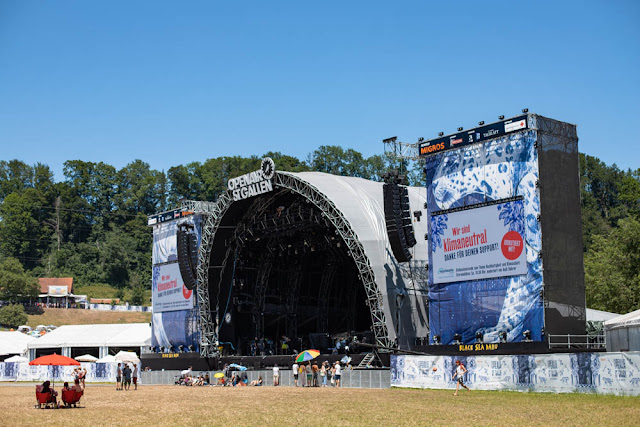 Overall, its great to see that even Switzerland seems to slowly wake up and try to make an impact. There is still much room to grow, but I feel like OpenAir St.Gallen is on a good way and hopefully they will consider some of the points I mentioned to improve next year. 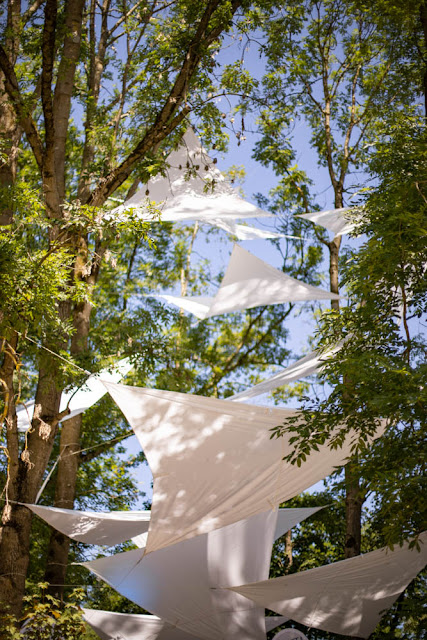